2. What is liquid chromatography?

The history of Liquid Chromatography (LC) began at early 20th century. In 1906, a Russian botanist Mikhail Tswett invented LC in order to separate various plant pigments. He injected the plant extract and petroleum ether through a glass column packed with calcium carbonate.

Since this was done on a glass column, he was able to observe the changes inside the column. At the beginning, there is only one layer of pigment on the top of the column (Figure 1.a). But as time passes by, the pigment is separated into four different colored-layers (Figure 1.b). The later research discovered that those four-layers were (i) bluish green; chlorophyll a, (ii) yellowish green; chlorophyll b, (iii) yellow; xanthine, and (iv) orange; carotene.
The whole process of separation took several hours and thus it was not a very practical method. This long analysis time was a part of the reason that LC did not become a popular analytical tool until 1970s, a half century after Mikhail Tswett’s invention.
Below is some terms commonly used in chromatography analysis.

HPLC stands for High Performance Liquid Chromatography. Before HPLC was available, LC analysis was carried by gravitational flow of the eluent (the solvent used for LC analysis) thus required several hours for the analysis to be completed. Even the improvements added in later time were able to shorten the analysis time slightly. Those classical/initial LC systems are called “low pressure chromatography” or “column chromatography”.

In 1970s in the US, Jim Waters founded Waters Corporation and started to sell HPLC instruments. This promoted the use of HPLC in practical analysis areas. The LC systems that Waters Corporation developed used high-pressure pump that generates rapid-flow of eluent, and thus resulted in dramatic improvement in the analysis time. Compared to the “low pressure chromatography” the newer types were called “high pressure liquid chromatography”. Therefore it was used to be thought that HPLC stands for High Pressure Liquid Chromatography, however nowadays it is a common agreement that HPLC stands for High Performance Liquid Chromatography. Another big change from Tswett’s date was the data acquisition methods. Instead of observing the changes of layers by eyes, detector system was coupled to the LC and out-put was recorded on paper chart. If we were to demonstrate Tswett’s analysis result on a chart (chromatogram), it will be like figure 3. 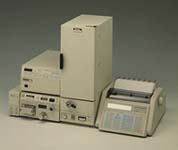 Technically speaking, the word LC represents all the Liquid Chromatography, including low pressure LC, however most LC systems used these days are HPLC thus often the word LC is used as comparable as HPLC.

Typical HPLC system consists of followings (Figure 4).
Details of each are explained below. Figure 4. Components of HPLC system

In the earlier state of HPLC development, the pump was the most important part of the system. The development of HPLC can be said that it was a development of pump system. Pump is positioned in the most upper stream of the LC system and generates a flow of eluent from the solvent reservoir to the system. In the earlier stage of LC development, to be able to generate the high pressure was the one of the most important system requirements. However, nowadays, the high pressure generation is a “standard” requirement and what is more concerned nowadays is to be able to provide a consistent pressure at any condition, to provide a controllable and reproducible flow rate. Since a change in the flow rate can influence the analysis largely.
Most pumps used in current LC systems generate the flow by back-and-forth motion of a motor-driven piston (reciprocating pumps). Because of this piston motion, it produces “pulses”. There have been large system improvements to reduce this pulsation and the recent pumps create much less pulse compared to the older ones. However, recent analysis requires very high sensitivity to quantify a small amount of analytes, and thus even a minor change in the flow rate can influence the analysis. Therefore, the pumps required for the high sensitivity analysis needs to be highly precise.

An injector is placed next to the pump. The simplest method is to use a syringe, and the sample is introduced to the flow of eluent. Since the precision of LC measurement is largely affected by the reproducibility of sample injection, the design of injector is an important factor. The most widely used injection method is based on sampling loops. The use of autosampler (auto-injector) system is also widely used that allows repeated injections in a set scheduled-timing.

The separation is performed inside the column; therefore, it can be said that the column is the heart of an LC system. The theory of chromatography column has not changed since Tswett’s time; however there has been continuous improvement in column development. The recent columns are often prepared in stainless steel housing, instead of glass columns used in Tswett’s experiment. The packing material generally used is silica or polymer gels compared to calcium carbonate used by Tswett.

The eluent used for LC varies from acidic to basic solvents. Most column housing is made of stainless steel, since stainless is tolerant towards a large variety of solvents. However, for the analysis of some analytes such as biomolecules and ionic compounds, contact with metal is not desired, thus polyether ether ketone (PEEK) column housing is used instead.

Separation of analytes is performed inside the column, whereas a detector is used to observe the obtained separation. The composition of the eluent is consistent when no analyte is present. While the presence of analyte changes the composition of the eluent. What detector does is to measure these differences. This difference is monitored as a form of electronic signal. There are different types of detectors available. Different detector types are explained in Lesson 6.

The change in eluent detected by a detector is in the form of electronic signal, and thus it is still not visible to our eyes. In older days, pen (paper)-chart recorder was popularly used. Nowadays, computer based data processor (integrator) is more common. There are various types of data processors; examples include a simple system consisting of in-built printer and word processor, and a personal computer type consisting of display monitor, keyboard, and printer. Also there are software that are specifically designed for LC system. It provides not only data acquisition, but features like peak-fitting, base line correction, automatic concentration calculation, molecular weight determination, etc…

The components introduced so far are the basics of LC system. Below are some optional equipment used with the basic LC system.

The eluent used for LC analysis may contain gases such as oxygen that are non-visible to our eyes. When gas is present in the eluent, this is detected as a noise and causes unstable baseline. Generally used method includes sparging (bubbling of inert gas), use of aspirator, distillation system, and/or heating and stirring. However, the method is not convenient and also when the solvent is left for a certain time period (e.g., during the long analysis), gas will dissolve back gradually. Degasser uses special polymer membrane tubing to remove gases. The numerous very small pores on the surface of the polymer tube allow the air to go through while preventing any liquid to go through the pore. By placing this tubing under low pressure container, it created pressure differences inside and outside the tubing (higher inside the tubing). This difference let the dissolved gas to move through the pores and remove the gas. Compared to classical batch type degassing, the degasser can be used on-line, it is more convenient and efficient. Many of new HPLC unit system contain a degasser.

The LC separation is often largely influenced by the column temperature. In order to obtain repeatable results, it is important to keep the consistent temperature conditions. Also for some analysis, such as sugar and organic acid, better resolutions can be obtained at elevated temperature (50~80 oC). It is also important to keep stable temperature to obtain repeatable results even it is analyzed at around room temperature. There are possibilities that small different of temperature causes different separation results.  Thus columns are generally kept inside the column oven (column heater).

Another member of chromatography, as often used as LC, is the Gas Chromatography (GC). While LC uses eluent (flow generated by a pump system), GC uses gas (carrier gas) provided from a gas-tank, thus it does not require pump system. Therefore, GC system is simpler than LC system and for that reason; it was widely available before LC system become popular. At that time, the word chromatography was referred to GC. GC’s simple system was an advantage but also a disadvantage. The samples to be analyzed need to be in the gaseous form before introduced to the flow of carrier gas. Thus, if the original sample was in gaseous form, GC is a convenient tool. However most sample is in the form of liquid or solid and requires heating at high temperature to make it into a gas.  Some analytes are alternated by heat, so the GC method is not an ideal for that case. Related problem is that GC has an upper limit for the analysis of large molecular weight compounds.

In comparison, liquid samples can be analyzed directly by LC. Also if solid sample can be dissolved in a solvent, it can be analyzed by LC. Some samples are insoluble in water, but most of those are soluble in organic solvent, there is a high chance that we can find a solvent that dissolves the sample. Therefore, LC can be used at ambient temperature (i.e., without causing alternation of analyte) for a wide range of analysis. This made the LC method become more popular than GC method.